Game Dev Story is a video game simulating the development. It is very similar to Game Dev Tycoon so if I’m a bit negative in this review it’s just because form the trailers of that game seems to offer more flexibility in this genre is vital.

The game is easily played in short bursts on my commute back home from school. Later on in the game there is little if no evolution  to the gameplay as this game was obvious polished for the first 10 years of making games and little else. At the time of writing I have 28 years under my belt and 800 million in my back pocket ready to spend but with nothing to spend it on. I’ve made 2 consoles and have 17 games in one franchise. Because of this the later years of no challenge the game quickly feels grindy. And why do I have to release a game in 3 months can’t I pull a valve and make people wait 7 years building a super-game.

The pixel art is nice and looks fine but doesn’t look like anyone put the time into giving the game any style of its own. I played this game on an IOS 7 iPad Air and the game has about 3 inches of the screen completely untouched.

I can see I didn’t play this game right because the way I think it was intended to be played is to have short bursts to see how well you could do in 20 years.

The chip tunes are entertaining enough for the first 2 hours but quickly grated after that because it consists of just one five second loop and other sound effects can be annoying as well. 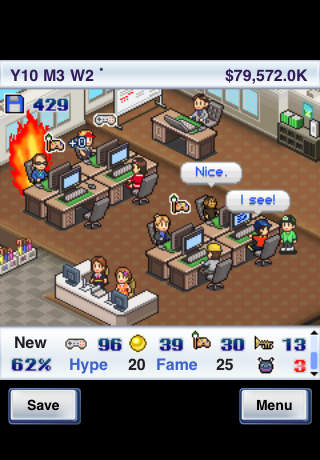 The easy to navigate menus and diligent auto saving means you will never rage quit and then finding you lost any progress.

IOS games shouldn’t be judged the way PC and console games should be judged. In PC and console games I will easily sit for 2-3 hours playing making them long term affairs that need to really engross me. IOS games on the other hand are just time-syncs to play for 5 minutes or so. With this in mind I think this game is worth the 99c price tag. But don’t expect it to alight your pubes like when you play Batman Arkham City.